Legendary Australian cricketer Shane Warne, widely regarded as the greatest leg-spinner of all time, has died aged 52, according to his management company.

Warne’s management said in a statement on Friday he died in Koh Samui, Thailand, of a suspected heart attack.

“Shane was found unresponsive in his villa and despite the best efforts of medical staff, he could not be revived,” the statement said.

“The family requests privacy at this time and will provide further details in due course.” 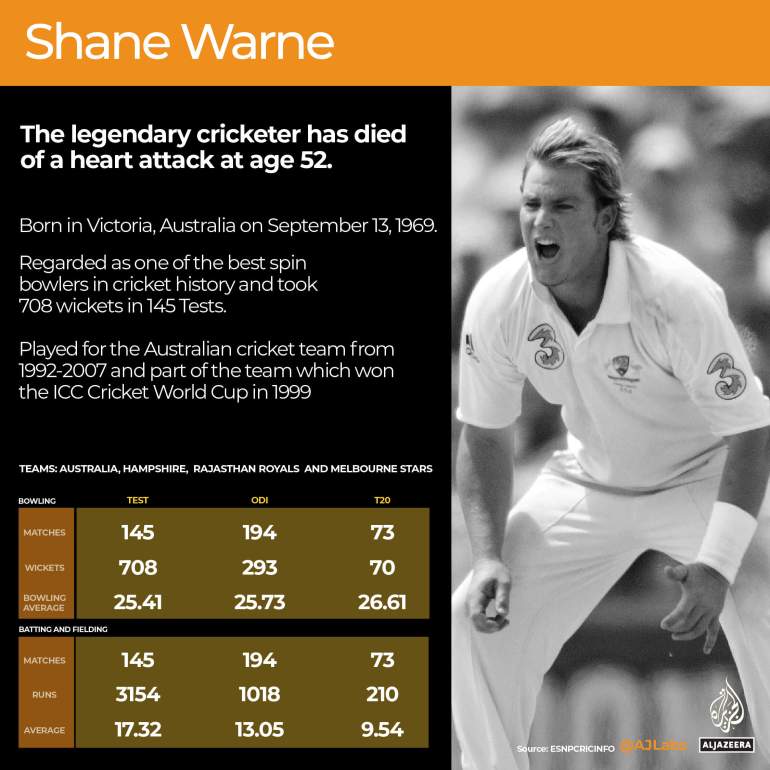 Thai Police said they were not treating the death as suspicious.

Warne is regarded as one of the finest leg-spin bowlers of all time after a test career which spanned from 1992 to 2007.

He took 708 test wickets, a tally surpassed only by Sri Lanka off-spinner Muttiah Muralitharan, who took 800.

He also had 293 wickets from 194 one-day internationals and won the man-of-the-match award when Australia beat Pakistan in the 1999 World Cup final.

Warne was also a handy late-order batsman. Though his test average was only 17.3 he took the role seriously and holds the record for the most test runs (3,154) without a century – his highest score being 99.

It was not all plain sailing, however, and his career was peppered with off-field controversy. He was punished for feeding information to a bookmaker, sending inappropriate text messages, and verbally abusing fellow players.

The wily spinner frequently courted controversy and served a 12-month ban after testing positive for banned diuretics in 2003.

His most serious offence came in 2003 when he failed a doping test for a diuretic on the eve of the World Cup and was banned from all cricket for a year – ruling him out of Australia’s defence of the trophy.

He returned from the layoff refreshed and revitalised, and in 2005 took an incredible 96 wickets through the year. His final test was at Sydney in 2007 when he took his 1,000th international wicket in all forms of the game.

He also played in the Indian Premier League and other Twenty20 competitions before retiring from all forms of cricket in 2013 but continued to be involved in the game as a broadcaster.

Al Jazeera’s sports correspondent Andy Richardson, speaking from Doha, said Warne was a larger than life figure and has been “central to cricket”.

Australian batsman David Warner said he was “lost for words, and this is extremely sad”.

“My thoughts and prayers go out to the Marsh and Warne family. I just can not believe it. RIP, you will both be missed,” he tweeted.

Two legends of our game have left us too soon. I’m lost for words, and this is extremely sad. My thoughts and prayers go out to the Marsh and Warne family. I just can not believe it. #rip, you will both be missed https://t.co/gduLY9bIwg

“Unbelievable. I am shocked to the core. This can’t be true … Rest In Peace, @ShaneWarne. There are no words to describe what I feel right now. A huge loss for cricket,” he wrote.

Cricket commentator Harsha Bhogle said: “I was lucky enough to know him well. The magic will stay forever.”

Biden to re-open detention center The cruelty of the prior administration Has come to an end. Now we will Demonstrate to the world. What we as Americans are The new homeland security secretary Calling out trump. Administration on His first full … END_OF_DOCUMENT_TOKEN_TO_BE_REPLACED

Republicans In Disarray Over Greene And Trump Impeachment- The News Today TNT The News Today TNT - Day 14 of the Biden Administration, and this day Ended indeed on a somber and Emotional note. As we've been reporting, moments Ago President … END_OF_DOCUMENT_TOKEN_TO_BE_REPLACED

COVID vaccine News: The EU's COVID vaccines crisis continues after, The bloc was accused of failing to secure enough. Vaccine supply quickly enough newspapers Across Europe blasted. The European Commission for its bureaucratic and Centralized … END_OF_DOCUMENT_TOKEN_TO_BE_REPLACED

On February 24, Russia started a massive invasion of Ukraine. Despite the Kremlin claiming the Russian army has entered the country as a “liberatory” force, it has mercilessly targeted Ukrainian civilians. It has bombed residential areas, schools, … END_OF_DOCUMENT_TOKEN_TO_BE_REPLACED

With wooden spinning wheels and hand-drawn looms, Bangladesh is painstakingly resurrecting a fabric once worn by Mughal emperors, Marie Antoinette and Jane Austen, but long thought forever lost to history. Dhaka muslin was stitched from threads so … END_OF_DOCUMENT_TOKEN_TO_BE_REPLACED

Hong Kong, China – The Hong Kong nursing home where Amy’s 78-year-old mother lives battened down the hatches when the COVID-19 pandemic hit. Elderly residents were confined within the walls of their rooms. Families were not allowed to visit. As the … END_OF_DOCUMENT_TOKEN_TO_BE_REPLACED

At least 1,700 foreign students are trapped in the northeastern Ukrainian city of Sumy, as shelling from the Russian army continues for a tenth day after humanitarian corridors failed to materialise. Shivangi Shibu, a 25-year-old medical student from … END_OF_DOCUMENT_TOKEN_TO_BE_REPLACED

US Secretary of State Antony Blinken has met with his Ukrainian counterpart Dmytro Kuleba on Ukraine’s border with Poland to discuss how to further support Kyiv while isolating Russia as the war entered its tenth day. The two leaders held talks on … END_OF_DOCUMENT_TOKEN_TO_BE_REPLACED

Griner arrested in February at a Moscow airport after Russian authorities said her luggage contained vape cartridges.US basketball authorities have said that an American star basketball player being held in Moscow on narcotics charges is two-time … END_OF_DOCUMENT_TOKEN_TO_BE_REPLACED

A second attempt to evacuate an estimated 200,000 people out of Mariupol has come to a halt amid ongoing hostilities. More than 3,500 people have been detained at anti-war protests in Russia. The Red Cross says the situation in Mariupol is extremely … END_OF_DOCUMENT_TOKEN_TO_BE_REPLACED

Video Duration 24 minutes 55 seconds 24:55 From: Inside StoryConflict driving up costs for wheat, corn and other staple foods.Russia’s war on Ukraine has created fears of a global food crisis. The two countries supply a third of the world’s … END_OF_DOCUMENT_TOKEN_TO_BE_REPLACED

Kroscienko, Poland – Jaroslaw Perzynski has not slept for 30 hours. Ever since the beginning of the war last week in Ukraine, the mayor of Sierpc – a small Polish town of 17,000 people – has been devoting most of his time gathering warm clothes, food … END_OF_DOCUMENT_TOKEN_TO_BE_REPLACED

On Monday, March 7 at 19:30 GMT:Novelist Kakwenza Rukirabashaija and poet Stella Nyanzi have both experienced the consequences of being outspoken critics of the Ugandan government. They have been jailed, tortured, charged with communications offences … END_OF_DOCUMENT_TOKEN_TO_BE_REPLACED

As the Russia-Ukraine war enters its eleventh day, we take a look at the major developments.These are the key events so far from Sunday, March 6. Get all the latest updates here. Mariupol to attempt civilian evacuation The Ukraine port city of … END_OF_DOCUMENT_TOKEN_TO_BE_REPLACED

Civilians across war-hit Ukraine fled on footpaths and grief-stricken parents mourned dead children as Russian troops continued to shell encircled cities. A promised ceasefire in the port city of Mariupol collapsed on Saturday amid scenes of terror … END_OF_DOCUMENT_TOKEN_TO_BE_REPLACED

The incident took place at Bab Hutta, one of the gates to the Al-Aqsa Mosque compoundOccupied East Jerusalem – Israeli forces have shot dead a Palestinian teenager after he allegedly stabbed two officers in the Old City in occupied East … END_OF_DOCUMENT_TOKEN_TO_BE_REPLACED